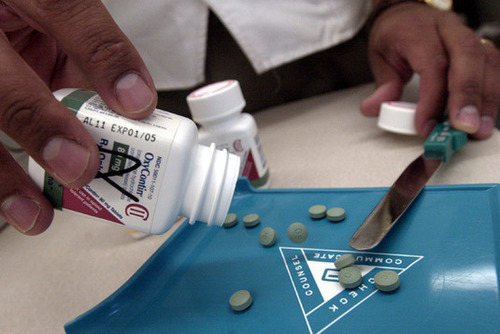 The news about narcotic painkillers is increasingly dire: Overdoses now kill nearly 15,000 people a year — more than heroin and cocaine combined. In some states, the painkiller death toll exceeds that of car crashes.
We compiled tens of thousands of records from all the companies that have disclosed their payments to doctors so far. Search for your physician.
The head of the Centers for Disease Control and Prevention has declared the overdoses from opioid drugs like OxyContin an “epidemic.” And a growing group of experts doubts that they work for long-term pain.
But the pills continue to have an influential champion in the American Pain Foundation, which describes itself as the nation’s largest advocacy group for pain patients. Its message: The risk of addiction is overblown, and the drugs are underused. What the nonprofit doesn’t highlight is the money behind that message.The foundation collected nearly 90 percent of its $5 million funding last year from the drug and medical-device industry — and closely mirrors its positions, an examination by ProPublica found.Although the foundation maintains it is sticking up for the needs of millions of suffering patients, records and interviews show that it favors those who want to preserve access to the drugs over those who worry about their risks.
Via www.propublica.org