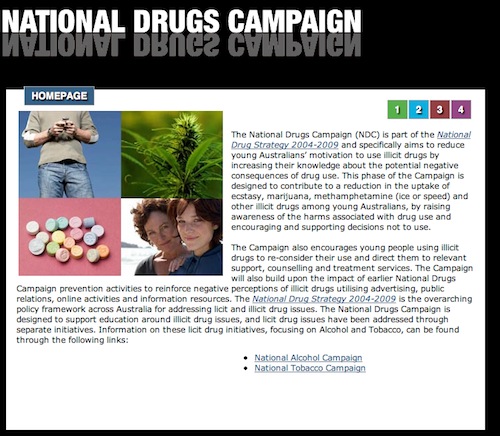 The Federal Health Minister has launched an Illicit Drug Campign to go along with its Tobacco and Alcohol campaigns. It’s a campaign that involves lots of information around the dangers of illicit drug use, that aims to “decrease motivation” of young people to commence use.

I’m all for education and knowledge, but I just get the feel this is just more of the same. There doesn’t seem to be any real differentiation from the decades of previous information and it just doesn’t seem that engaging. Again, campaigns like this probably do help but I’m interested in your thoughts: if you had the same budget, what would you do to ensure an effective and engaging campaign for young people and illicit drugs?

Here’s the text of the full press release:

The Rudd Government today launched the next stage of its hard-hitting $17 million advertising campaign to combat illicit drug use in Australia.

The campaign presents the ugly facts of illicit substance use including confronting and graphic images of young people addicted to drugs and the reality of underground production
labs.

This campaign aims to tackle drug use by presenting the physical and psychological impacts of illicit drug use.

It urges young people to decide against drug use and directs users to support, counselling and treatment services.

This campaign is about young people understanding the consequences of illicit drug use, asking them to ‘face facts’ and emphasising the damaging effects drugs have.

Too many young Australians don’t understand the very real and dangerous impacts of taking or using illegal drugs.

Ecstasy is made in filthy, makeshift labs, using toxic ingredients like battery acid and bleach. The toxicity of each pill varies and the potential for overdose is in every single pill.
There is no ‘quality control’ over the manufacture of drugs such as ecstasy.

In 2007 more than one third of the people aged over 14 had used an illicit drug at least once in their lifetime.

The advertisements, which will appear from this Sunday, were developed with the advice of clinicians, law enforcement officers and young people.

Further information, fact sheets and advice is available at www.australia.gov.au/drugs or by calling the free national hotline: 1800 250 015.