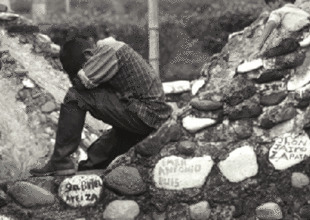 Imagine for a moment that China, in an effort to reduce cigarette smoking and associated health costs among its population, declared war on U.S. tobacco production. Imagine Chinese planes flying over American tobacco fields, spraying crop-killing poison that destroys not just tobacco, but all vegetation, wiping out farmers’ livelihoods, displacing millions of families, and contaminating the environment.

Such an act of hostility and disregard for national sovereignty would provoke, at the very least, military aggression from the United States. Yet, unbeknownst to most Americans, for the past 20 years the U.S. has conducted just such a campaign against Colombian coca farmers.

I visited Colombia for the first time in January 2012 on a delegation with Witness for Peace, an organization focused on changing U.S. policy in Latin America. A public health worker, I’d signed up for the trip to understand the origins and motives of a drug trade that contributes to a violent illicit market and shatters countless lives through addiction. By the time I left Colombia, I realized that while people who suffer from drug dependence are clear casualties of the trade, the millions of Colombian small farmers poisoned and displaced by U.S. drug policy are perhaps its greatest victims.