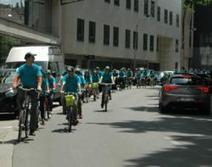 According to this year’s United Nations World Drug Report, drug-abuse kills some 200,000 each year and creates a “heavy financial burden” internationally. In a concerted effort to counter this epidemic, in the weeks leading up to the UN Day against Drug Abuse and Illicit Trafficking June 26 through the first week of July, Scientology Churches, Missions and groups around the world, working with like-minded individuals and groups, organize, sponsor and contribute to drug awareness activities to prevent drug abuse before it begins.

The International Day against Drug Abuse and Illicit Trafficking was created by the UN General Assembly in December 1987 to encourage all sectors of society to work together to tackle drug abuse and addiction. Scientologists commemorated the day by organizing and sponsoring conferences, lectures and symposia, participating in cross-country running and cycling races, meeting with elected officials and manning drug education booths and kiosks.

In Tokyo, the Church helped organize a drug education symposium where legislators networked with representatives of civil society and journalists, sharing information on effective drug prevention strategies.
Sydney Scientologists set up drug information booths on busy streets, where visitors watched the Truth About Drugs documentary, Real People—Real Stories, and took home copies of The Truth About Drugs series of drug education booklets to share with friends and families.