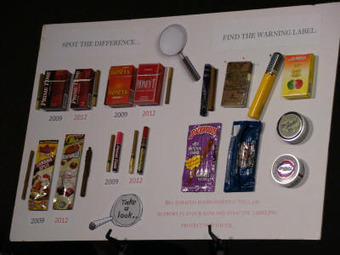 Health groups call for federal action on kid-friendly tobacco novelties.On the occasion of National Non Smoking Week, a group of national and provincial health agencies is calling for the federal government to crack down on the marketing of tobacco novelties aimed at youth.“Within the shadow of Parliament Hill, we were easily able to find deadly tobacco products that look like candy or a fruit roll-up,” said Dr. Atul Kapur, President of Physicians for a Smoke-Free Canada. “These are exactly the types of products that the government set out to ban three years ago.” Dr. Kapur displayed some of the 19 different products that were found in over 60 different flavours in stores in downtown Ottawa.When the Cracking Down on Tobacco Marketing Aimed at Youth Act was passed in September 2009, there was a widespread belief that this new law would end the sale of flavoured cigarillos, as it was intended to do. There was also widespread hope among many that the government would extend the ban to flavoured smokeless tobacco and flavoured shisha (waterpipe tobacco).
Via www.smoke-free.ca