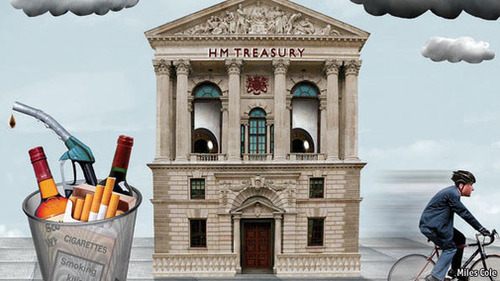 IMAGINE a Briton’s new year resolutions: he vows to stop smoking 20 cigarettes a day, forgo his daily bottle of claret and nightly whisky, and stop betting on football. Confronting his enlarging gut, he promises to make his ten-mile round-trip commute by bike, not car. He may even go walking at weekends.What admirable goals. And since this gentleman’s annual vice bill comes to around £7,500 ($11,750) he will be well-rewarded for his virtue even before considering the effect on his health. But the Treasury might rejoice a little less. More than half of that vice bill flows directly into government coffers. In the fiscal year 2010-11 nearly 10% of all taxes collected came from duty on alcohol, tobacco, gambling and fuel as well as from vehicle excise duty, a tax that falls most heavily on the least efficient cars.
Via www.economist.com