An Australian ATOD professional pointed me to a fake UNODC site, which looks nearly identical to the real one. The main difference is that the lead story on the fake site states: 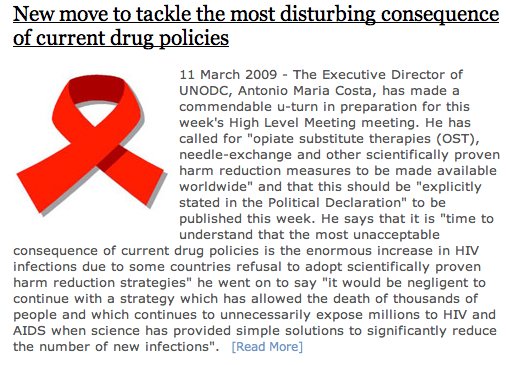 If the ‘read more’ or any other link is clicked on the fake site, it leads to a page with the following text:

JOBS AND POLITICS BEFORE HEALTH?
In fact Costa has not made a statement supporting these life-saving measures and it is likely that the Political Declaration, which will shape global drug policy for the next ten years will have no reference to harm reduction.
This website is part of a campaign to expose the damage caused by misguided United Nations drugs policy. It is in no way endorsed by the United Nations.
Ten years after the UN based their strategy on the slogan “A drug free world: we can do it!” cocaine production has increased by 20% and opium production by 120%. Despite restrictive drug laws and extraordinary levels of incarceration, drugs remain completely out of control. Efforts to reduce the harm caused by drugs are repeatedly undermined by the UN’s refusal to pursue harm-reduction policies.

Cheap public health measures are easy to deliver and extremely effective in reducing the spread of blood born viruses – particularly HIV – among injecting drug users. What can possibly be wrong with taking practical measures to reduce the harms associated with drug use? The results of denying access to these proven public health measures can no longer be termed ‘unintended consequences’.

During the second week of March 2009 the UN will hold a meeting in Vienna for high-ranking government officials to review the past ten years of global drug control efforts and to adopt a new Political Declaration for the next ten years. We think it is time for:

No more stupid slogans
Replacing dogma with science
A UNODC commitment to save lives through harm reduction
A real improvement in the control of drugs
Dear Mr Costa
It would be nothing less than criminal if all proven public health measures to reduce HIV among injecting drug users were not featured uppermost in the Political Declaration that will arise out of the forthcoming High Level Meeting on drugs to be held in Vienna in March.

If you agree with the above please click here to email Antonio Maria Costa, the Executive Director of the UN Office on Drugs and Crime and copy in his boss Secretary General of the UN Ban Ki Moon.

This is a protest that has had a lot of thought put into it and I imagine technically its been a feat in itself. What are your thoughts – is this a legitimate form of protest?

I tend to believe it is, if no laws are being breached. I imagine some are in this case, as far as use of the UN’s intellectual property. That said, I tend toward supporting actions like this as it’s a way of putting an opposing viewpoint to behemoths like the UN.